I’d recommended the line of The Dark Side to Jordan Buys the previous day, and eager to take up the recommendation Jordan threw a rope down the huge 55m pitch as I climbed Jolly Roger on the perpendicular wall.  As I was topping out, having plugged my entire rack into the route, I could see my belayer 55m below, slightly distracted by Alex Honnold who was heckling the amount of gear I’d placed and clearly engaging my belayer more than my bumbling about on an E3!  Alex, clearly equally attracted by the line on the perpendicular wall, shouted to Jordan, asking for critical beta.  Having seen Jordan on the crux a little earlier, I could tell it was no pushover move, certainly not on the flash, but with spaced gear, obvious rests and clearly chalked holds it was an obvious choice for a flash attempt.

Having followed us up Jolly Roger, Alex and Chris abseiled back down to the base of the wall and in no time at all Alex had raced up the lower 30m section to the resting ledge. Whilst Alex constructed critical protection below the huge runout to the top of the wall we heckled back about the zig-zag hassles of using a single rope on UK trad.  As Alex moved into the start of the runout crux the heckling turned to silence.  Locking hard into the crux, showing obvious fear, Alex demonstrated the clear and present mental control he’s well know for.  A super strong effort and to my mind, at least as impressive as the widely reported solo of The Complete Scream.

Only last week someone on UKClimbing was arguing that hard UK on-sighting was dead.  Well here’s another E8 that’s had a flash ascent, and is a clear contender for those talented enough. 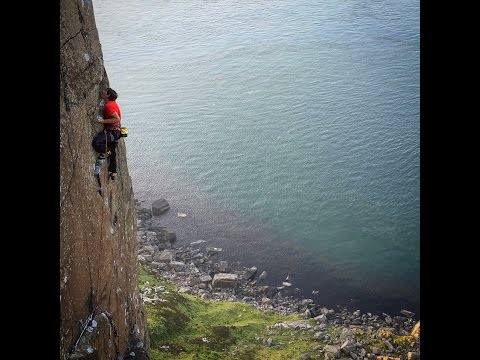