Sometimes in the mountains things goes wrong, the unexpected occurs, the shit really hits the fan.  You think you’re prepared, you think you know how to handle every situation, over the years you’ve probably rescued a few people here and there, but then something happens you can’t control and you’re helpless.

The weather was foul on Friday last week, the sort of foul you tend not to bother going out in, 30mph winds, sideways rain, 100m visibility.  Normally, I’d have probably not bothered to venture out, but a friend and ultra-runner, Toby, was visiting from Chamonix.  He’d never been out in the Peak District before so I’d promised to take him out for a run after work, just a short circuit round Shining Tor above Buxton.

We set off from Windgather, Gore-tex on, hood up, pulled sideways to shield the rain blasted by the wind.  I assured Toby it wasn’t always like this in the Peak and the view was normally beautiful, but you have to earn your fun in the UK.

As we ran steadily along the ridge line toward Shining Tor I could hear the tip-tap of Toby’s feet just behind me, barely audible through the background beat of the weather.  As we approached the final steps to the summit I noticed the tip-tap had gone.  I turned, he wasn’t there.  In the distance, at the limit of the visibility in the mist I could see him, stumbling like a drunk.  I ran back, I could tell something was wrong.  As I came closer to him I could see mud covered his face and hands.  He said he’d woken up face down.  He didn’t know what had happened but he thought he’d passed out.  There was no history of any issues, and no real understanding of what had happened, but given all the factors, the weather, the location, the implications of a health problems, the only obvious thing to do was to make our way back to the car, now about 3km away.

As we steadily trot back along the ridge we chat about what might have happened, he had no history of anything like this, only a bit of car sickness on the way up here.  Was it just a faint, epilepsy, something else?

As the tide of unconsciousness flowed through his body, a wave of helplessness hits me like a tsunami.  I initially stand over him in desperation over what I can do, Toby had assured me nothing like this had ever happened before, other than just a few minutes ago.

Toby’s body arches, his muscles stiffen and limbs straighten eruptively. The fit starts, 20 seconds of violence as his arms, back and legs contract and extend uncontrollably.  I try desperately to stop him hitting his head into the stone slabs and his body rolling into the water logged bog.  Finally the seizure stops and I roll him into the recovery position.  At this stage I can only hope he comes round and conscious again.  Fears of the worst possible outcome race through my mind but I’m comforted that I can see he’s breathing, his vitals seem ok.  It must have only been a couple more seconds later, but it felt like a lifetime until his eyes roll open. With a thousand yard stare and a sharp gasp he asks me what has just happened, unaware of the violence of the previous 30 seconds.  After a couple more seconds he stands.

I’m relieved he’s still with me, conscious and seemingly ok, but my fear is that this epic has only just started.  My mind races to work out what next.  We have to get out of here.  We have no phone signal and the weather is still awful.  Rain and wind is hammering the side of our faces.  The air ambulance won’t be able to fly in this weather and it would take at least 1-2 hours to get a rescue up here.  I could put Toby in my emergency bivvy bag (get one – I never go out running or climbing without one) and leave him to go get help, but I know we’d both face the results exposure as a result of the process.  We have to walk out. 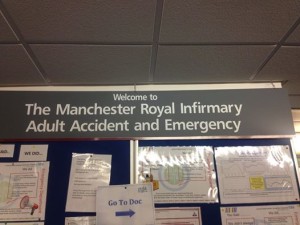 There’s undoubtedly a risk of further issues in walking out but I don’t think we really have a choice given the circumstances.  After a nerve wracking and cold 30 minute shuffle we’re relieved to arrive back at the car and we drive back to Manchester and on to Manchester Royal Infirmary.  A rock and roll Friday night.

I leave Toby with his girlfriend as he is put in the resuscitation room and strapped up to a heart monitor.  After 48 hours of tests it seems he’s had multiple heart seizures due to tachycardic arrythmia (a racing and irregular heartbeat) and requires shocking with a defibrillator to ‘reboot’ it back to normality.  His heart has been beating at >150 bpm for almost three days.  It’s seemingly a heart issue that’s come on very quickly, an ECG for a race medical certificate only a few weeks ago had given him the all clear.  10 days later and he’s still there in hospital, thankfully now out of the acute care, while they try and ascertain exactly what’s causing it and decide whether further intervention is needed.

I’ve dealt with quite a lot of injuries and supported a number of rescues in the mountains, but this was by far the scariest of them all.  We were minimally equipped for the weather, we could have carried warmer clothes perhaps, but running is inherently light and fast and sometimes you have to rely on your experience and ability to make the right decisions.  This felt so much worse than dealing with the trauma of backs, ankles, elbows and the like.  It’s such an unlikely event, but when someone’s vital signs look in doubt you can feel completely helpless.

The only security I had was that I was first aid trained (I had a valid REC5 until recently).  Everyone should be, it might just save you or your friends in the mountains.  Mountain running, climbing, skiing etc are all worth the risk, but it pays to be ready for when it does go wrong.

The following Wednesday, I was briefly back from the BMC International Meet in Wales to sort out some things at home and to see Toby in hospital.  By sheer coincidence it was the Shining Tor Fell Race that evening.  The route is almost the exact route in reverse we’d planned to do the previous Friday.  As I passed the location Toby had the seizures, it was such a different experience, racing downhill at maximum pace.  It was cathartic.  This time the weather was perfect and we were treated to a spectacular sunset.  Sometimes you have to earn your fun!

Here’s the view you should have had as we ran round Toby – Get well soon!